A short history of William and Eliza Torkington, my great-great-grandparents. 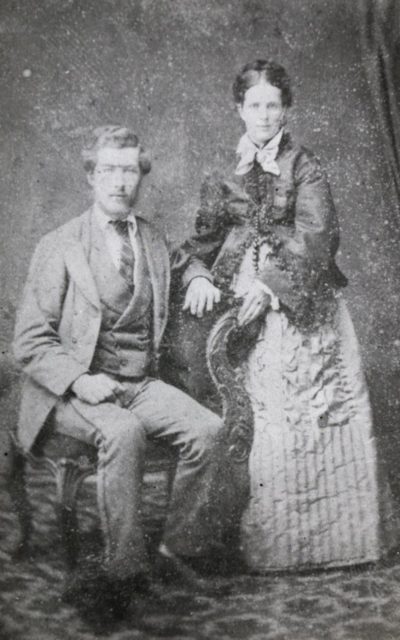 Born in 1844 in Ashton Under Lyne in Lancashire, William Torkington was the eldest of eight children, a carpenter and bricklayer by trade. His father had also done well in business as a carpenter, and all the children were well educated. In 1867 he married Eliza Hollas, of whom very little is known. Of their seven children, four died as infants. After his wife died of consumption in 1879  William travelled extensively in America and New Zealand before deciding to emigrate to New Zealand with his his three remaining children. While waiting for passage in London in 1883 Krakatoa erupted causing vivid sunsets, unusual tides and dust-laden skies, though they weren’t aware of the cause at the time.

Despite having the opportunity to set up  a business in Auckland, William chose instead to purchase land in rural Ti Point and settle there to a life of hard work. There was little return by way of money, but his three boys grew strong, robust and self-reliant. William and his eldest son Arthur were often away from home for whole days working at carpentry and bricklaying jobs and leaving the two youngest to fend for themselves. The Torkington family had never lived on the land before, so learning about farming was very much a process of trial and error for them.

William Torkington had an encyclopedic mind and owned a great selection of well-read books. He was also a great walker – he could walk the distance from Ti Point to Auckland in a single day. He had trained with the militia as a young man and so he always walked with a straight back and square shoulders. He could outwalk anyone, even as an old man.

He lived at Ti Point for the rest of his life, along with his sons and his 11 grandchildren. He was close to his grandchildren, and loved to entertain the little ones by singing songs and telling tales. He died in 1923 and is buried in the Whangateau Cemetery.