A short history of the lives of Joe and Minnie Torkington, my great-grandparents. 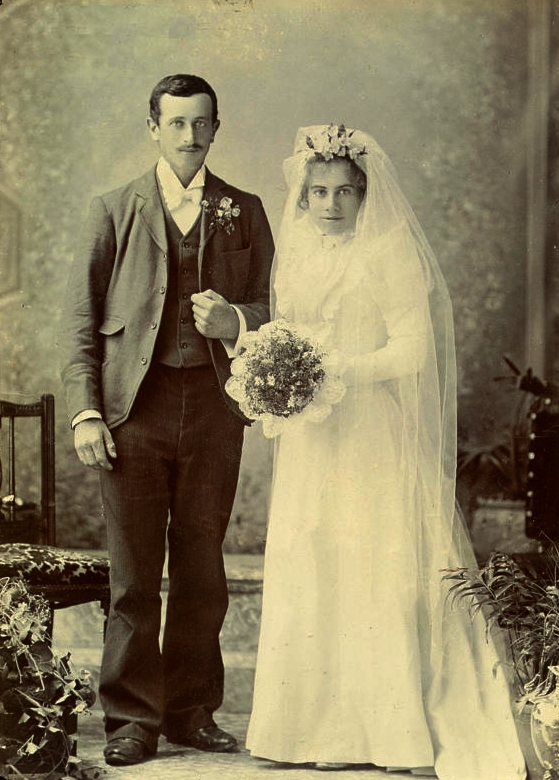 Joseph Torkington was born in Ashton Under Lyne in Lancashire in 1876. His mother died when he was three years old and he spent much of his childhood in England living with relations. Joe was very close to his brother Harold, who was just over a year older than him.  He was reportedly a delicate and sickly child, which was one of the reasons his father decided to bring the family to New Zealand when Joe was seven years old.

Their life in New Zealand was completely different to what they had left behind in England.  They became strong and self-reliant and even though they knew nothing about the sea they quickly became expert in gathering shellfish, handling small boats and fishing. For a time they attended Leigh School, which was a 3 mile walk each way. However the best education was from their father, who instilled in them a love of books.

Times were tough for them, there was little money, so they had to find work where they could. As young adults they joined a surveyor’s party, mapping roads around the Coromandel Peninsula. At other times they worked at the lime works in Warkworth, took building jobs in Auckland and helped build the local school house. When they were older they owned a block of land at Point Wells where they went digging for kauri gum.

Joe was well known in the district for his musical abilities. His brother Arthur had purchased him a violin in Melbourne and he became a skilled fiddle player, providing music at local dances and entertaining his household.

Minnie Clarke was born in Leigh in 1876, daughter to Charles Septimus Clarke and Mary Anne Wyatt. She was the fourth of six children. She was five years old when her family moved to Auckland, and seven when her mother died and the family moved back to Leigh, where she spent her childhood. She attended the Leigh school and often helped her father with chores on the farm. In 1899 she married Joseph Torkington and they settled on Joe’s farm at Ti Point. Considering their very different family backgrounds, the marriage could have been considered an unlikely match. Despite her back country farm upbringing, Minnie’s English gentleman father instilled in her good breeding and a strong religious sensibility. She would have no cards being played in the house on Sunday and often became dismayed by the rough country manners of the Torkingtons (which seem to have also been inherited by her own children).

Their life at Ti Point involved running their small farm – they had a small herd of cows which were milked by hand each day, the cream sent on to the Matakana cream factory. Minnie was the embodiment of domesticity, bringing up her seven children and always providing a hearty meal for the family.

Joe died in 1936, leaving the running of the farm to Minnie and her four sons. She continued to run the household, was a dedicated correspondent to her daughters and was active in the Women’s Christian Temperance Union, an organisation that advocated for women’s rights. She died in 1951 and was buried alongside her husband in the Whangateau Cemetery.