Victor Harvey Smith was my father’s father – a Grandfather I have no memory of at all, as he died when I was only 1. We are lucky enough to be in possession of letters he and his two brothers wrote home during the war, as well as a short journal he wrote on his return. This is a short summary of Vic’s war experience. 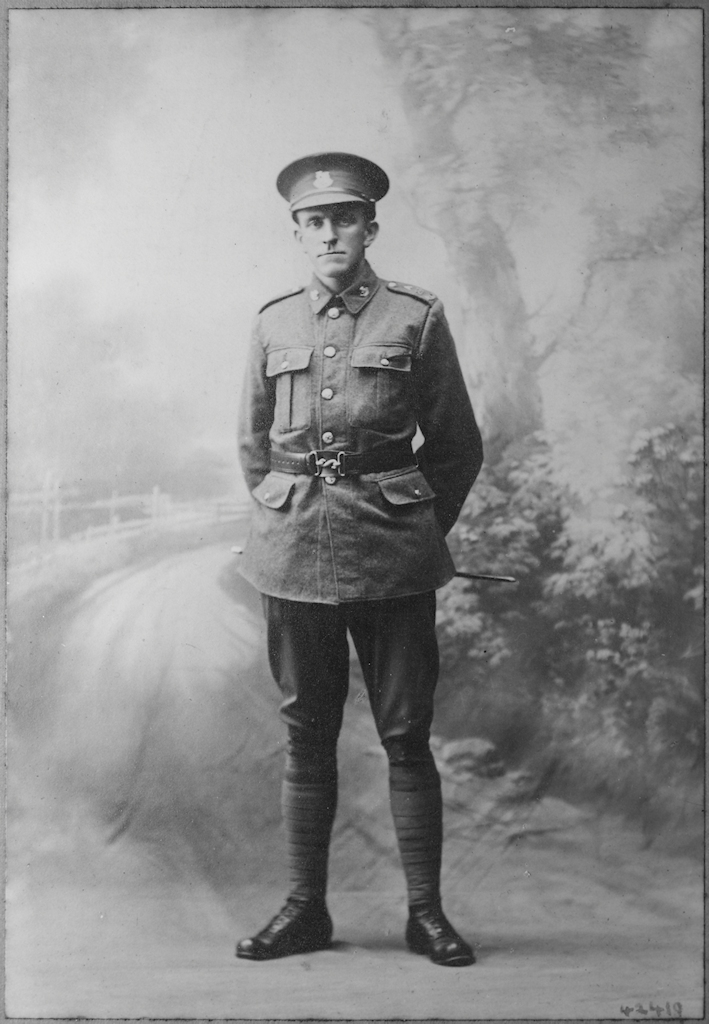 Victor was 29 when he enlisted late in 1916, working as a meter inspector for a gas company in Auckland. After completing his preliminary training in New Zealand, he left on the “Ruapehu” on the 14th of March and arrived in England on the 20th of May (a journey of nine weeks and four days). In England he trained in “musketry, wiring, live bomb throwing and machine gun etc”. He left with his company for the front-lines in France on the 22nd of June 1917.

He went into the trenches near Ploegsteert Wood on the 8th of July and on the 10th was wounded by a stray shell which embedded shrapnel into his chest. In his diary he wrote:

“…they found that I had got what the sergeant said he would give a fortune for, but as I was losing a great deal of blood, I began to take very little interest in what they said.”

He was evacuated to a casualty clearing station behind the lines at Steenwerck, where he stayed for two days after having an operation to remove the shell fragment. Possibly some of his most terrifying moments of the war were during an air raid that occurred here. In his journal he wrote:

“An air raid took place there on Friday morning, killing two nurses and a number of patients. I heard before leaving, from an Aussie orderly that one of the Fritz airmen who had taken part in the raid that morning, was taken alive. When asked to explain why they had bombed the hospital, he pointed out that we had our observation baloon hung almost above it, and to attack the baloon he had to risk hitting the hospital. I had seen the baloon over the hospital the day before, so I knew that what the airman had said was right. “

He went back to England on a hospital ship on the 16th of July. In England he started on a long road to recovery – his future very much up in the air. By January 1918 he was classed as “A” (fit for service)

“They classified me A. last Wed., just six months after coming from France, but when the examination took place on Friday I was deferred for one week for further tests.”

A month later was re-classified as “C” (home service). He doesn’t give much commentary on this sudden deterioration, but more generally he wrote:

“Many men were in very poor condition owing to the severe food rationing. The right kind of foods could not be had and apples and rice diet during a very severe English winter was quite useless to men who were not used to such cold weather. No sugar or milk could be got and the apples were cooked just as they fell from the tree without being peeled or cored in any way. Sometimes enough bacon for one man would be divided among ten men. The result was that many men who may have gone to Sling as fit men, had to be rejected and sent back to New Zealand. “

In February he wrote:

“You will no doubt be pleased to hear that there is a very small chance of me going back to France as an infantry man, and a good chance of not going back at all. I will probably be put on permanent base That will mean an easy job in England or perhaps in France. There is also a small chance of me being sent back to N.Z., but that will depend on how much shipping room there is, as they always send the cot cases first, and the others have to wait if there is no room. I went before the medical board last Saturday, but I have not heard yet what they are going to do, except that I will not be classified A for a very long time yet.”

He was put on a ship back to New Zealand on the 6th of April 1918 and was discharged on the 12th of July. Much was made of Vic’s good luck in the wound he received. He wrote –

“When I left I was told my wound was worth £50 to any man. I thought they were stretching it, but I am satisfied now that they were right, as this is a gentleman’s life with the best food in the country and everything that I can possibly want. Later he wrote about the possibility of going back to France – “If I should go back and you hear that I have been wounded remember that it will probably be a piece of good luck as it will mean a few months holiday.”

“[Gorrie, another brother] expects we are in France and wishes us better luck than Vic had. On the whole I think about the same luck would do us.”