A summary of the WW1 service of brothers Neil Henderson Smith and Norman Roderick Smith who enlisted together in early 1917. 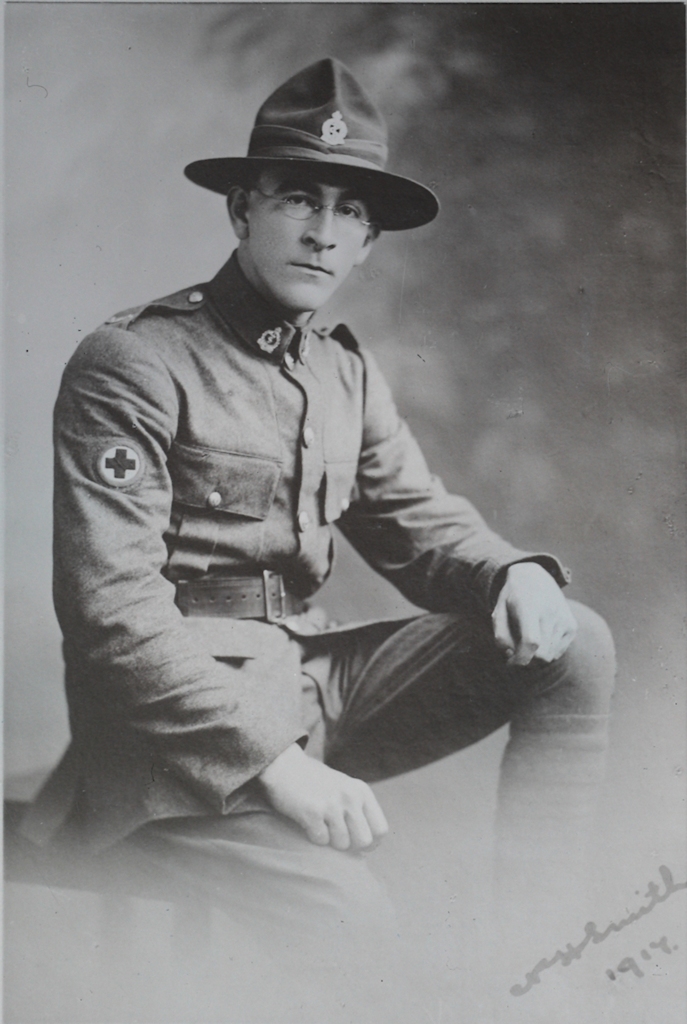 Neil was a very bright 20 year-old who had attended Auckland Grammar School and gone on to become an assistant master there. He was outgoing and charismatic, and had a high opinion of his own talents. His letters home often reflect his wry sense of humour.

Norman was a 24 year-old primary school teacher in Auckland at the time he enlisted. He was close to Neil, who gave him the nickname “Trot” (I’m not sure what the origin of this is).

Both brothers were placed first into home service then transferred to the medical corps. They left New Zealand in June 1917, arriving in England in August. After spending some time in various training camps, they were within hours of departing for France in October 1917 when they were instead transferred to Cambridge Hospital in Aldershot for training. Here Neil was one of three men “allotted to one of the three operating theatres.” Here he gives an enlightening description of his work:

“I thought when I got the job that it would consist of wheeling a patient in and waiting outside doing some slushy job until the operation was over and wheeling him out again. I did not think that I should take an active part in the operations. But I do: I am trusted with dozens of things that I thought they would never trust to anyone inexperienced. I sometimes feel that I should like to take a somewhat less active part than I do until I get a bit more used to it. The sight continually of so much blood, they say, usually leads to orderlies fainting at first but that does no effect me at all. Other people’s blood leaves me quite clear headed, though I shouldn’t guarantee anything if I were to see too large a quantity of my own. But I get heartily sick of the smell at times. I don’t know whether it is the temperature of the room (which is kept very high to help in case of shock or collapse), or the smell of the chloroform or of the ether or of the blood or the sepsis or the combined smell of the lot but at the end of the shift I am jolly glad to get out into the cool air and get round a meal. I assist for six hours daily 10 – 1 and either 2 – 5 or 5 – 8. They are operating all day after 10 am and frequently do more urgent operations at night. There are four on each operation, the surgeon, the anaesthetist, the theatre sister and myself. We all wear surgical overalls of course and I am the only one of the three who does not wear sterilized gloves (the anaesthetist of course does not count – he has always got his hands too full to be able to do anything). So I am the only one permitted to touch any part of the patient or any object that has not been sterilized, throughout the operation. [There is a nurse in the adjoining room but she is always fully occupied with routine work] So you can see they don’t find it hard to keep me busy. I have made no blunders yet but there have been hundreds of chances and I suppose there will be hundreds more of making them. But if you keep your wits about you you are generally pretty certain not to kill anyone. I have already seen a couple of operations far more horrible than anything that could occur in peacetime but it wouldn’t make the recollection of of them any more pleasant to embody a description in a letter. Everyone is very punctilious about the smallest details in the theatre and an English officer and a German prisoner get precisely the same care taken of them on the table.”

“Convoys of wounded are arriving every third night now on the average and as a convoy means getting out of bed somewhere about midnight and doing anything from 1 to 3 hours work you can imagine that they are not particularly welcome, more especially as we go on duty at 6.30 am as usual. It is pretty well dark when “Reveille” blows at 6 am and fairly cold too, but not nearly so bad as I expected it to be. “

They both describe how good the conditions were at the hospital. Neil writes:

“I expect you are worrying at this very moment about us living on issued rations among the snow on One Blanket Hill; whereas actually we both have the afternoon off and have just come up from a cozy billiard room where we have been playing for two hours at the rate of 1 1/2d each per hour. We eat on the average seven meals a day – tucker is very cheap at the canteen. We go to the theatre three times a week. We have four blankets, a pillow and our overcoat and a fire going in the barrack room practically day and night. Our washing is done for us free of charge. So you see at the present moment we are not deserving of any great sympathy on account of the hardships we are suffering. The only fly in the ointment is that we are frequently pulled out of bed about 1 am to transport poor devils from France from the train to the Hospital. I am still in the operating theatre the novelty of which has just about worn off. There is plenty of work doing but every one has to work here. One does not mind so much when one is doing something useful which will someday provide an answer to ones grandchildren’s impertinent questions as to the part one played in the great war.”

“As I write there is a fine, bright coal fire burning in the grate not four feet away, and I have taken my boots off and have got my feet well warmed so on the whole “Yours Truly” is fairly cozy and comfortable. I think somehow I could stand quite a lot of this. Neil is reading to-nights London “Star” and is giving me his opinion of the Russian situation and the war in general. If Mum starts worrying about us you can tell her that the chances are that we are doing nothing more desperate than washing up dishes or carting about drums of dressings or something of that sort. “

It sounds as if they would have been quite happy to stay at Aldershot, but in December they were finally sent over to France, where they were stationed together for a time. Norman wrote:

“We are still together and assisting each other to have a good time and always on the best of terms. “

They seem to have been very fortunate in staying together for as long as they did as it was customary for brothers to be separated – as Neil explains:

“By the way in case a whole ambulance section gets strafed, they don’t encourage two brothers to remain together. They separate them in order to make practically certain that not more than one will get a knock.”

Later in December Neil became ill and was put in hospital. Norman “went up to the front or its neighbourhood”. They don’t devote much of their letters lamenting this separation (though some of Norman’s letters are quite probably missing from this time), however it must have been quite a blow for them after having been together from the beginning of their training. In fact they lost touch completely for a time, as Norman writes:

“It is now four months since I was separated from Neil and it is over two months since I had any word from him. I am trying to get into touch with him through Mac who has had letters from him since I have. I think he is quite alright and well but we have lost each others addresses and experience has taught me that it is almost useless to write when the correct address is unknown.”

In April Neil’s recurring health problems (tonsillitis then trench fever and anemia) lead to him being evacuated back to “Blighty”. In July of 1918 he was offered a job as an instructor in French, English and Mathematics. He stayed on in England after the end and was offered a scholarship to study at Cambridge. He was discharged from the army on the 28th of August 1919. Ironically, in the end the war was very fortuitous for him. It is unlikely he would have had the opportunity to study at a prestigious English university had he stayed in New Zealand.

Meanwhile back in France Norman was “put on water cart duty (purifying and conveying water for the use of troops)” with the New Zealand Rifle Brigade somewhere near the front line at Ypres. He describes his job as “running along behind a water cart and drawing and chlorinating the drinking water for the camp”. Of the three brothers Norman spent the longest time – nearly 5 months – near the fighting. He was generally very positive about the conditions in his letters home, though he did have one gripe:

“I am still keeping well and except for the “little things” I am not having such a bad time. In case you don’t know what I mean by the “little things” I will tell you that they are the creeping crawling lice which make their home in one’s woollen underwear, I have carried out several vigorous counter attacks on them with severe losses to the enemy, but their numbers don’t seem to decrease very much. Oh well! I don’t suppose that a fellow can call himself a soldier until he has been half eaten by them. “

Another hint he gives about the conditions he faced and the challenges of his job was his mention of a photo he had seen in one of the newspapers he had been sent from home.

“A funny thing about the paper was that the first picture I saw was a water cart stuck in the mud – an experience that we had ourselves just a few days ago. “

The photo Norman saw in the Auckland Star

Norman too eventually became ill with trench fever (a moderately-serious disease transmitted by body lice) at the end of May. This quickly got him sent back to England. He was deemed unfit for active service”, and got a boat back to New Zealand in October.

A poignant ending to Norman’s story is that he died of influenza in 1924, a year after marrying Alma Torkington. Alma subsequently married Norman’s brother Victor (Alma and Victor were my father’s parents).

One thought on "Neil and Norman’s War"